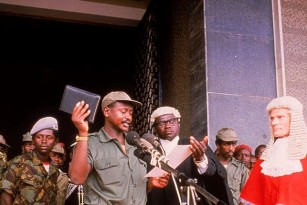 I was 10 when Museveni’s rebels burst into the capital, Kampala in 1986. I remember, the teachers at Luzira Church of Uganda, in a panicked frenzy, dispersed us from school at about 11 am. We lived near Silver Springs, in Kitintale, which meant as I ran towards home, the closer the whistling of the bullets and thunderous explosions of the bombs got. Adult men, women, children and animals – fright-stricken – ran at and past me. I only settled down when dad arrived home at

about 22hrs. It had been hell for especially males to move in the dark streets of the city. ‘Panda gari’ or ‘climb the vehicle’ in English, was the order of the day, as men, young and old, were loaded onto millitary lorries and taken to unknown destinations – some of who never ever returned home.

The back end of our house had a flat concrete roof, so that night, we slept on the rooftop and watched as the bullets pierced the darkness of the night. Lupayi, my big brother, had wondered loudly how it would feel if a stray bullet hit the flesh. Dad and the men stayed in the house and throughout the night, we heard heavy boots pouncing through the house, loud and menacing swahili exchanged – as we got robbed empty by morning break.

The retreating soldiers, on their way northwards, towards Sudan and northeastern Congo, erased whatever they came across. Rape, destruction, plunder abode. In the morning we heard that Mamma Suuna had been a casualty. She had been raped and murdered in her dingy brewery, three houses away. Jaya, the neighbour telling the story, said she had refused to part with money that the solders demanded. The next days were chaotic. Hustle and restlessness ensued as people carried loads of their loot home. Random corpses, sporadic wailings here and there across the green scapes, smell of gunpowder, hung over us.

But there was something else permeating the air. HOPE.

Hope that the days of misrule, food rations, sectarianism, arbitrary deaths and a scared populace were behind us. We had gotten a raw deal since independence in 1962 – we had had 8 presidents and a living hell. ‘This is going to be better’ we all thought. What Uganda needed and deserved was a people’s leader. Someone who actually cared for the people. And Museveni was our man, we had a good reason to believe. Order was returning:

‘Anybody caught looting or participating in any criminal activity will face the firing squad…’ the voice blusted out of Radio Uganda, the national broadcaster.

‘Fellow Ugandans, comrades, THIS is not a mere change of guards, this is a fundamental change…’ the youthful voice of our liberator seneraded Ugandans with these famous words.

As calm fell onto the seven hills, and some joy begun to sneak into peoples hearts – I couldn’t help but feel a tingling sense of optimism. Museveni’s proclamations about the 1986 coup had spoken to our worst fears and best hopes – even as a child, I got it.

“The problem of Africa in general and Uganda in particular is not the people, but leaders who want to overstay in Power,” he recited his vows to us.

Thirty-one years later – from hope to despair – we have witnessed the troubling trajectory of events culminating in the current push for life-presidency-at-any-cost – Power corrupts, but absolute power does indeed corrupt absolutely – even the most benevolent are susceptible.

This entry was posted in Uncategorized. Bookmark the permalink.